‘It was not only valuable, but historic’ – Junot Diaz on the Edinburgh World Writers’ Conference 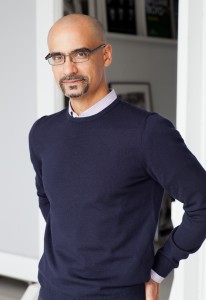 Junot Diaz is an early bird, it seems. He first suggests a call at 5.30am his time, which later gets changed for 8.30am due to our schedule, not his. But then, if in the last few years your literary output has been rewarded with, among many others, the Pulitzer Prize for Fiction, the Macarthur Fellowship (a no-strings attached award of $500,000 for “talented individuals who have shown extraordinary originality and dedication in their creative pursuits and a marked capacity for self-direction”), and the Sunday Times EFG Private Bank Short Story Award for ‘Miss Lora’ – the richest short story prize in the world – as well as holding down the day jobs (fiction editor at Boston Review and Professor of Writing at MIT) – you have a lot to fit in. His most recent book is the award-winning This is How You Lose Her. He will be taking part in the Edinburgh World Writers’ Conference: Melbourne this Friday.

EWWC: You must be very busy. How come you’re keen to fit in a trip to Melbourne to take part in the EWWC there?

JD: Australia was one of the first places that I ever got invited to as a writer, so I have a lot of affection for the place. I met a lot of really interesting, smart people who were involved in a lot of activism around immigration, and they became real friends. Also, the literary culture both in Melbourne and Sydney is incredibly vibrant, and on the personal side, a lot of what is happening in Australia, vis-a-vis immigration and bizarre politics, feels familiar to me. There aren’t that many analogues – countries that are Western, democratic, ex-colonies – to the United States. So for me, that makes Australia an incredibly interesting model.

The other thing was that the first novel I ever attempted to write, when I was a senior in high school, was a ridiculous Stephen King pastiche set in, of all places, Australia. Though the Australia I described resembled in every detail the Dominican Republic I grew up in. So that’s a third nostalgic connection.

EWWC: You took part in the EWWC in Edinburgh last year. What did you make of the Conference?

JD: Given the kind of pressure that’s being placed on literary culture both local and international from corporate forces, I think there is an absolute importance and necessity in both encouraging and developing and practising literary culture at both a local and a global level. It almost becomes a human rights issue to make the arts available to people.

I think that the Conference was enormously successful. On a personal level I was able to meet and talk with this incredible spectrum of artists from all over; artists I’d grown up reading, artists who I knew and artists who I’d never met. For me the historical nature of those events cannot be overplayed, it cannot be over-exaggerated. For many, many of us – for me coming from the Dominican Republic – the whole theme of a national literature is not a minor question, not an irrelevant question. And to be able to thrash that out I thought was not only valuable, but historic – and really important.

EWWC: You’ve come from the margins, and you are generally interested, it seems, in representing unheard voices. Now with the accolades you’ve received in recent years, you’re part of the mainstream. Have the awards changed anything for you at all?

JD: I think we’re sometimes simultaneously mainstream and simultaneously not. So frequently magazines will list a top hundred contemporary writers and not a single one of those writers are Latino; in the last year I can think of three such lists and in every single one, all the Latino writers were left out.  As an immigrant writer we’re typically being reviewed by people who have literally no experience of or interest in the issues we’re exploring – it’s like reviewing a book on Freud and the reviewer having zero experience of psychoanalysis or psychiatry, it’s insane. On the other hand, as a writer I’ve been incredibly blessed and incredibly fortunate; but I also notice the gaps.

EWWC: In her keynote address last year in Edinburgh Ahdaf Soueif said: “In Egypt, in the decade of slow, simmering discontent before the revolution, novelists produced texts of critique, dystopia, of nightmare. Now, we all seem to have given up – for the moment – on fiction.”  Do you have any views on whether particular periods in history or current events tend to correlate with one form of literature or another?

JD:  Literary culture, from what I’ve studied, has never been static. Genres rise and genres fall. Today the novel is predominant in the US but perhaps tomorrow perhaps it will be spoken word poetry. Who is to say and more vexing, who can ever know? For me what matters is that we defend literary culture as vigorously as we can. Literary culture has been a consistent defence against tyranny, against solitude, against despair, against the wanton cruelty, stupidity and senseless of our species. The form matters less to me at the moment than the fact that I’d like to see literary culture, which I love so deeply, to survive and perhaps one day become more than just a minority interest.

EWWC: If there was a writers’ conference in 50 years time, what questions do you think it would address?

JD: Hopefully we will be in a better place as a planetary culture and we will be wrestling with how to cope with all our humane awesomeness but I doubt that that’s where we’ll be. I fear, the way we’re going, environmental degradation and its social costs will be at the top of the agenda. Unfortunately.

EWWC: If you had to move permanently to one of the EWWC cities – Edinburgh, Berlin, Cape Town, Toronto, Krasnoyarsk, Cairo, Jaipur, Beijing, Izmir, Brussels, Lisbon, Port of Spain (Trinidad), St Malo, Kuala Lumpur & Melbourne – which would you choose and why?

JD:  That’s a tough question. Let me visit all these cities first and then I’ll see what I can come up with. As an immigrant, as someone who always seems to roam, living anywhere permanently would be a mighty big challenge for me.