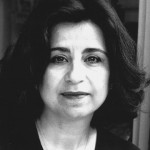 Maps of love and hate: Nationalism and Arab Literature

Ahdaf Soueif’s The Map of Love (1999) was shortlisted for the Booker Prize and translated into 30 languages.  Her most recent books are her memoir: Cairo: my City, our Revolution (2012) and, as editor, Reflections on Islamic Art (2011). She is the Founder and Chair of the Palestine Festival of Literature (PalFest).

Tahar ben Jelloun is one of France’s most celebrated writers. His first novel, ‘Harrouda’, was published in 1973. Since then, he has written numerous novels, short stories, poetry, and essays. He is perhaps best known for his trilogy: ‘The Sand Child’ (1985); ‘The Sacred Night’ (1987: for which he received the prestigious French literary prize, the Goncourt, making him the first Maghreb author to do so); and ‘The Wrong Night’ (1997).

Anne-Solange Noble has been working in publishing for many years, heading the Rights Department first of Editions Flammarion and now of Editions Gallimard, a 100-years-old family-owned publishing company where she promotes translation rights of many prestigious authors such as Nobel-Prize winner J.M.G. Le Clézio, and of best-selling novels such as ‘The Elegance of the Hedgehog’.

Selma Dabbagh is a British Palestinian writer of fiction based in London. Her first novel, ‘Out of It,’ (Bloomsbury, 2011) has been listed as a Guardian Book of the Year in 2011 and 2012. Her short stories have appeared in anthologies published by Granta, International PEN and the British Council. She was the 2005 English PEN nominee for the David TK Wong Short Story Award. She is currently working on a second novel about expatriate living.

Chair/Moderator of the ‘A National Literature’ event, Barkha Dutt is Group Editor with NDTV, India’s premiere news and current affairs network. She is one of India’s best known journalists and television anchors and is also the youngest journalist to receive the ‘Padma Shri’, one of the country’s highest State honours. In a career spanning sixteen years she has won over forty national and international awards for journalism. In December, 2012 she won “International TV Personality of the Year’ at the AIB (Association for International Broadcasting) awards in London and “Best Current Affairs Presenter” at Asian Television Awards in Singapore.