Shifting, questioning, fragmented: Suzanne Joinson on the ambiguities of a national literature

Before talking at the Edinburgh World Writers’ Conference in Kuala Lumpur recently I had never particularly considered myself an ‘English Writer’. My family on one side are Irish, the other Welsh. I was born in the North of England and now live in the South. I spent many years in London and could confidently call myself British, but English is a more complicated matter, as is the idea of a national literature. I live a few miles from where William Blake wrote his love poem to England, ‘Jerusalem’. Not so far from Virginia Woolf territory, too, and I spend much of my time shuttling between the small coastal town where I live and London. Despite the atmospheric architecture of the city – Soho, Bloomsbury, Pimlico in particular – or the beauty of the coastline or the South Downs, the most emotive places for me are actually the points of exit: Victoria Station and Gatwick airport. It is as if I don’t fully belong either in the city or by the sea and am only happy in England if I can leave on an aeroplane, and I regularly do. I write in English, within an English tradition, but I’m unsettled within those confines and any sense of contributing to a literature that sits within the framework of national borders is as paradoxical and complex as my feeling towards home.

The mongrel English are islanders, much as they conveniently forget this. The sea is everywhere and the houses are small. It is a claustrophobic country and people cling to a regionalism to fend off the conflict or tension that comes with a national sensibility. Writers from Scotland, Ireland, Wales, London and the North of England are often fiercely territorial. They stake their ground with pride and dignity. They reference themselves within a context, emit a sense of community. Most of all, they seem to belong to a geographical collective. I happen to live in a scrap of land so over-shadowed by the metropolis of London that it almost has no regional identity of its own. It is closer to France than most of the rest of England, chalky, mild-weathered. Often people choose to come to this part of the country to fade away quietly in nursing homes, to watch seagulls, to feel rain or to drink tea while, as Auden said, ‘In headaches and in worry, Vaguely life leaks away’.

There are no specific prizes for English writing, no awards, no self-referencing colloquiums and certainly no Southern Writers Awards. Yet these are, if not corridors of power, certainly parks and side streets and corner shops of power, all operating within the language of the global coloniser. What is left of Englishness and the literature that sits within its contours these days? Following what we might call a melancholic withdrawal of empire and faith, there isn’t much left but a profound state of identity crisis, and the literatures arising from this are by necessity shifting, questioning and fragmented forms.

A London walk I take regularly is from Victoria Station to Soho, via St James’s Park. Four pelicans live in the lake in St James’s park, presumably they belong to the Queen, it being her front garden. There is a sign that says ‘Do Not Feed the Pelicans’ and I have observed that while three of the pelicans spend much time together, happily doing their thing on a small island in the middle of the lake, the fourth pelican is always ostracized. To be an ‘English Writer’ can feel a little like living the existence of that fourth pelican. You comfortably inhabit the Queen’s posh park. You are well fed amongst fountains and tulips and weeping willow trees. You are surrounded by stately buildings and the drumming of procession soldiers in rehearsal. You are at the heart of it: this (once) great nation! But you don’t feel so great. You’re not sure who you are and you regularly feel lonesome.

Nationhood is about identity, but the more one hunts down one’s own stories, the more fractured any sense of identity becomes. Writing, by virtue of what one chooses to write about and what one leaves in or takes out, is about creating narrative meaning from your life. Despite my inclination to dismiss the label ‘English’ I can see that my first novel, ‘A Lady Cyclist’s Guide to Kashgar’ is in some senses an exploration of Englishness. It is about English missionaries in China in the 1920s, and it is true that I am drawn towards stories and narratives that explore a legacy between colonial histories and how they resonate today. In my writing, the islandness of England becomes highlighted: the sea around it, a compulsion to leave it, the isolation, all of that examined. Yet, I couldn’t possibly write with a consciousness of my national identity because what kind of writing would that produce? A writer can only tell the stories that haunt her, but hauntings are chaotic, slippery and contradictory. Writing is subversive and uncontainable, and if it so happens that a particular line of thought relates to or explores a specific question or theory relating to national identity then so be it, but it could only be accidental or, at least, not the central impulse behind the creation of the book.

Not many people think of Virginia Woolf as a travel writer but in 1906 when she was 24 years old she visited Constantinople. Sitting at a window looking down at the city she wrote in her diary, “And in all this opulence there was something ominous, and something ignominious – for the English lady at her bedroom window.” Framed by a window, an English lady at the fading end of an empire, she feels an obscure shame as she looks over a city that is as unreal – and yet real – as any city dreamt up by Calvino and it is clear that the unsettledness of her being English  comes into sharp relief.

I read novels in English, written by writers I am interested in, either in translation from other languages into English or written directly in English. The authors are sometimes English but more frequently they are from other places. I am lucky enough to operate in a language into which many books are translated and I am interested in the worlds the novels convey, the stories they tell and the way they use language. I don’t really believe in nationality, or a literature that confines to the edges of a rigid definition.

My grandmother, the Irish one, did not have very much money but she liked to travel. She would take a train from her home in Cheshire to the port in Holyhead and spend a day watching ferries go across to Ireland. Or she would visit Manchester airport, watch planes taking off and landing, and look at the departure boards flicking through the destinations. I have inherited her love of looking into the horizon, of wanting to be both on the move and stay still. One’s national identity does not feel meaningful when one is in the inside of writing, it is just one detail in a more universal story. Yet perhaps from another point of view – the other side of an ocean, the end of a train journey or with the passing of time – national signifiers may in the end seem relevant; I’m not sure. I do know that stories are more often than not born in the no-man’s-land of not-quite-belonging, in transitory existences or inbetween places and those zones and states of mind and landscapes tend to have no borders, but perhaps distance will show otherwise. 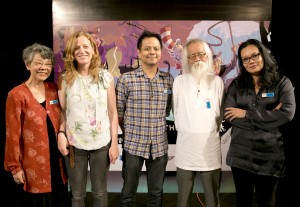 The #Word Cooler Lumpur Festival has been a fascinating experience. I spent time with writers from Malaysia, Singapore and Vietnam. Discussions ranged from colonial history to the politics of language to the terrible pollution drifting into the city from Indonesia. I don’t know if national borders and identities are the crucial signifiers of the world or not, but I do know that conversations such as those that happened in Kuala Lumpur are exciting and inspiring and that it was an honour to be involved in the ongoing dialogue.