A Conversation with China Miéville

China Miéville will be revisiting the Conference theme of The Future of the Novel in Toronto at the International Festival of Authors on 25th October.  We had a quick chat ahead of his trip in which he revealed, among other things, his sanguinity towards pirate editions, in which city he would choose livelong exile, and his reaction to the reaction to his Edinburgh ‘moment’ this past August.

EWWC: The Guardian called your keynote address on ‘The Future of the Novel’ “barnstorming”, Kirsty Gunn spoke of the “exhilarating anarchic spirit of true creativity” which “electrified” your address; other audience members were less enthused and scorned your “dotcommunism”. Were you prepared for the kind of reception your address elicited in Edinburgh?

CM: I really didn’t know what to expect. I wasn’t necessarily expecting that much of a response to it. If you’ve been thinking about something for a long time you kind of lose track of what other people think about it. It was useful for me to hear the objections from people like Ewan [Morrison] – who obviously I disagree with, but who’s smart and serious and interesting – they made me realise that I have to hone my explanations somewhat. That’s the appeal of giving version 2.0 of the same talk again – it gives me a chance to think about those critiques and respectfully respond to them. Overall I was really startled and pleased that there was such a response to it on both sides.

EWWC: Where there any responses that you’d heard before, or that you were expecting?

CM: I think what tends to happen – and this is not unique to just this debate – is that your own position becomes parodied. So if, for example, you say “I am not a defender of the existing punitive system of copyright”, people turn round and say “How can you say that writers shouldn’t be paid?” Which is incredibly infuriating, because you didn’t say that. I think that kind of debate happens all the time with high octane arguments. I find that exhausting and I oscillate between thinking it’s my duty to dot every “i” and cross every “t” – while on the other hand sometimes it feels like it’s occasionally almost wilful misunderstanding. It does depends on my mood, but that kind of defensiveness tires me.

EWWC: You’re revisiting the theme of ‘The Future of the Novel’ in Toronto later this week. Have any of your positions or suggestions changed or developed since August?

CM: I think I’ve come to realise a bit more where it’s helpful to spell certain things out. The point of these things is to present a provocation. It’s in the nature of a 15 minute talk that it’s neither possible nor is it your job to laboriously spell out all possible positions; your role is to get the discussion started. I haven’t changed my opinion but I’ve become more aware of what’s clear and what’s not clear in my argument. I think sometimes you can make a stronger case if you lay out an alternative remit or position, but you’re not obliged to. That’s a rhetorical trope, the critique can have teeth whether or not you lay out an alternative. It’s quite helpful and the argument might be more persuasive if you do, but there’s nothing wrong with holding your hand up and saying “I am open minded about what’s going on”.

The other thing is that people’s responses in the main focused on digitisation – there were a few other points in that talk for example, about translation and so on, but the ‘dotcommunism’ overwhelmed the other strands a bit in the ensuing discussion which I somewhat regret, as I think the other issues of, for example, form and experiment, are important and interesting.

EWWC: To your knowledge has anyone ever remixed or repurposed your work – and what do you think of it? Do pirate editions of your work concern you?

CM: Pirated editions of my work come out the second the work is published, like everyone’s. To the best of my knowledge there’s not a great deal of fanfic about my work, so I honestly don’t know. It’s worth reiterating that I never advocated remixing. I said that it’s likely and unworrying and may or could lead to some interesting things. I also said it may lead to some absolute crap. It’s more a question of being sanguine about it, than enthusiastic.

EWWC: You didn’t sign the ‘Statement of Principle and Intent’ agreed at the Edinburgh World Writers’ Conference in August 2012 which stated that “copyright which has historically been the basis for writers’ income is increasingly being infringed, (something which threatens both the income generated by the individual literary work and its artistic integrity).” Why?

CM: First of all, I want to be clear – I do understand why some writers want to sign this and I think it’s a perfectly legitimate debate. But I felt that the formulations within that statement are highly problematic, both implicitly and explicitly. When the statement talks about copyright having been the thing which has protected work’s artistic integrity – i.e the existing model of copyright which is a model predicated on punishing transgressions – I think that’s a model which is broken and outdated and philistine. I think we have huge problems with the current model. I felt that the Statement assumed that model, and for that reason I wasn’t comfortable with it. Many of its predicates are unproven and indeed highly questionable, so when it says that copyright enshrines the work’s integrity, I think that’s straightforwardly bogus. You can make a strong case that copyright has been a profoundly philistine dynamic over the years. When it says that it protects the writers’ incomes, I think that is highly questionable. My position is not a naïve libertarian one whereby you get rid of copyright, information is free and everyone makes loads of money – I don’t think that’s true at all. Nor do I think there aren’t important and knotty questions of, for example, courtesy and fair recompense. My problem is with the existing model and the punitive actions around it. My position is that it’s a very complicated discussion; that it is virtually impossible to generalise. There are undoubtedly times when the mass-scale pirating of a particular book has resulted in large scale losses for the author – I don’t dispute that for a second. I can also name specific examples where the pirating of a particular book has given it a new lease of life and has increased its sales. To posit that a non-paid for download is stealing is in my view entirely wrong. It’s a basic error: the idea that a million unpaid-for downloads are a million instances of theft is just nonsense because you have no idea how many of those people would have paid for it otherwise. Maybe 995,000 of them had no intention of looking at the book otherwise before they looked at it via download and therefore you might even ultimately gain sales. You’d have to go much more into it to prove that a download is theft. I make my living as a writer, I’m not advocating that writers shouldn’t be able to make their living from writing books  – what I’m saying is that the model in that declaration was, to my mind, simplistic and wrong.

There is a moral issue here as well which I feel very strongly about. This is very noticeable in the music industry, when I hear some people who make their living from music attacking filesharers and accusing them of moral transgression through theft, I want to say to them, ‘Did you ever in the playground exchange a mix tape? Did you ever lend a friend a book and have that book passed around the class and it was amazing and you discussed it and you all shared it? I think it is completely immoral to take what a younger more hi tech generation are doing, which is an updated version of what we all did, and attack them for it. I think it’s outrageous. And I think what we should be doing instead is having a serious conversation which says ‘let’s work out a model in which you have access to what you want, in ways which are not difficult for you and which are financially possible for you, and for which we get paid.’

EWWC: On to, perhaps, more flippant territory. You’re interested in Futures; what questions do you think a World Writers’ Conference in 50 years’ time might address?

EWWC: And finally … If you had to be exiled permanently to one of the EWWC cities - Edinburgh, Berlin, Cape Town, Toronto, Krasnoyarsk, Cairo, Jaipur, Beijing, Izmir, Brussels, Lisbon, Port of Spain (Trinidad), St Malo, Kuala Lumpur & Melbourne – which would you choose and why?

CM:I really love Cairo, and I haven’t been to Cairo for many years. It can only be a partial answer as there are many cities on that list I haven’t been to – Berlin, for example – so it would be irresponsible to say it’s my final answer – but Cairo would be my first choice, I think. 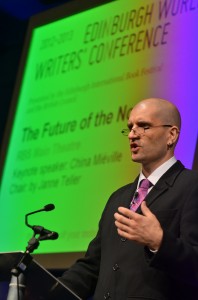