Literary Orderlies & Specialists of the Unknown: A Dispatch from EWWC St Malo 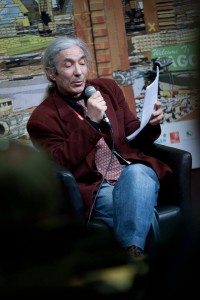 For more than twenty years, the literary & film festival Étonnants-Voyageurs has summoned francophone writers from far and wide to join in the sleepy seaside medieval city of Saint-Malo to discuss the vital elements of their craft.  Inspired by such fathers of travel writing as Stevenson and Conrad, its founder, Michel Le Bris, chose to create an international forum surrounding the ideas of travel literature and of a world literature.

Over the course of three days of intense debates, lectures, and literary cafes some two hundred writers gathered under this year’s theme of “Le monde qui vient” (The world to come) and were joined by an enthusiastic audience of many thousands.   Despite the typically wet Breton weather there was a palpable energy in the air.  Throughout the city each evening one could recognize huddled groups of writers smoking and conversing beneath awnings or gathered in leaning old bars engaged in animated conversation.  The structure and formality of the day’s events seemed to spill over into a jovial nightlife sparking  discussions between writers and readers alike.

The Edinburgh World Writers’ Conference series of five debates were hosted in the Palais Du Grand Large overlooking the English Channel and the old Fort National.  Saturday, Algerian author Boualem Sansal, whose books are currently banned in his homeland, introduced the first debate, Censorship Today.  Sansal spoke of censorship historically and psychologically, but returned again and again to the climate of Islamic fundamentalism that he fears is hastily blotting out freedom of expression in the Arab world.  Sansal related with absurdist humor being awarded the 2012 Éditions Gallimard Arabic Novel Prize for his book “Rue Darwin” only to have it revoked before the fifteen thousand Euro prize had been delivered.  Although no one would admit to it, this was clearly a reaction by the Arab Ambassadors Council to his having attended the Jerusalem Writers’ Festival earlier in the year.  Sansal said, “I went to Israel on principle, to demonstrate my power as a free man who does not obey orders.”  He was told his award ceremony was indefinitely ‘postponed.’  Later, the entire jury resigned in protest, and a wealthy Swiss offered Sansal an equivalent consolation prize which he then donated to the A Heart For Peace foundation.  Together with the Hadassah Hospital in Jerusalem they finance costly cardiac surgery for Palestinian children living in the West Bank.

“Ironically”, said Sansal, “silence has become a form of freedom; saying nothing is saying it all but it is also depriving yourself of any action, while the struggle for freedom requires, first and foremost, a practical commitment.”  But at what cost?

Julien Mabiala Bissila from Brazzaville spoke of the violent censorship occurring at home, where it’s “safer to shut up” than risk imprisonment or mutilation.  French writer Jean-Marie Blas de Roblès mentioned that in a democracy such as France, censorship exists through financial groups and its partners, making it more insidious and therefore more accepted.

The next day began with Velibor Colic introducing the debate on National Literature.  Colic is from Bosnia, where he has witnessed first hand the inherent dangers and devastating consequences of nationalistic thinking.  He believes that while a nationalist literature’s role in war is never direct, it points the finger at the ‘other’, the ‘enemy’, and strengthens the dualisms which are necessary to war’s very existence.   This kind of literature may even replace history in the popular consciousness, as in Serbia where certain nationalistic novels were actually taught in schools as history proper.  Not only does this type of literature dehumanize the so-called enemy, but the writer as well, reducing her to a mere tool of propaganda.

Colic declared, “This confusion between genres, between history and literature, was a tragedy.  For everyone.  The distinction between myth and reality lies in intelligence and common sense, in the ability to distance oneself and to reason…   But, unfortunately, new national literatures work on an emotional and a collective level, they inexplicably erode convictions that were set in stone.  And at that point, there is but a step between national and nationalistic literature.”

Amongst those present at this debate, it seemed relatively safe to assume that most were in accord with Colic’s sentiments, but it was impressive to hear them uttered by a man whose home had been burned, and life turned upside down all in the name of nationalism.  He hopes that, “After the era of politics, which is only a perverted game that we will eventually have to put an end to, and after the era of crazy and bloodthirsty national bards, will come the era of literature.  A nomad and human literature, a mobile and multicultural literature, disheveled, undisciplined, without visas and without passports.”

The second debate that day was Style vs. Content, hosted by French-Tunisian writer, Hubert Haddad, who opened with a poetic (if not esoteric) introductory speech, itself highly stylized, infused with paradox.   Haddad’s conviction that “Only literature gives reality its full dimension, at the same time allusive, lethal, unpredictable, marvellous, and wildly open to interpretation…” seemed to equally apply to his own words as well.

Haddad argued that both style and content were inexorably bound saying that “Only literature gives reality its full dimension” and discounted factual description as a means of conveying anything intimate or crucial.  With sincere passion, Haddad delivered mystical proclamations such as “Literature is just reality becoming aware of itself in its enigmatic, symbolic and secular activity.” and “The origin of the world is to be found in the mind of a poet admiring Courbet’s painting or the depths of the Milky Way.”

Haddad scoffed at Norman Mailer’s opinion that “Style is an instrument, not an end in itself.” retaliating, “Only a literary orderly could say that.  If style is an instrument then Proust and Rimbaud are operating theatres.  No, style is no more an instrument than art, in and of itself, would be an ‘instrument of propaganda and education.’  On the contrary, it distorts all instrumentations and is life itself, replicated ad infinitum in the mysteries of language.”

Haddad closed his speech with a quote from Emily Dickinson, “the magic scribbler, for she alone, beyond language and beyond all authoritative pronouncements, uttered the only truth; for what, really, is style?”

A something in a summer’s Day

As slow her flambeaux burn away

Haddad’s lofty sentiments left some scratching their heads and even agitated, such as Mbarek Beyrouk who said, “I don’t understand this.  Literature has to be magic, instinctive, and from the guts!” which was met with broad applause.  And Azouz Begag, who grew up in a shanty town with illiterate parents, responded, “I really believe if you can dig through the different layers [of your heart] and extract a book from it, it works.  I’ve never worried about style.”  I don’t believe these convictions were at all at odds with Haddad’s, but afterwards Haddad simply stood up and walked out.

Style is a slippery topic indeed, difficult to gain a toehold on and open to infinite definition; however, Haddad delivered the best that any of us could hope to do: he offered a poem full of wonder, passion, and the very mystery of existence.  The highest poetry does not answer any question or posit a belief, however, it also doesn’t leave much to say afterwards.  If just for a moment, I relished the reigning silence which resonated across the sea like a temple bell. 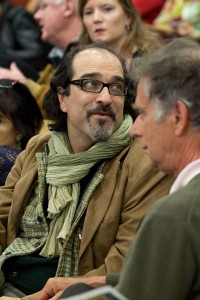 The third and final day of the festival began with Atiq Rahimi: Should literature be political?  Rahimi related his personal history as a former member of the Afghan resistance in the 80’s, and the complications of having a communist brother – continually threatened by radicals, and later killed.  Rahimi’s novel, Earth and Ashes, was his way of dealing with his brother’s death.

Throughout his keynote speech, Rahimi reiterated a theme that had been present throughout the entire conference: that literature must first come from a sincere depth, an ‘inner experience’, which compels the writer to express himself out of a necessity.  This in a way transcends the concepts of politics, style, nationalism, and censorship (these are all afterthoughts in the creative process), but at the same time does not exclude them.

The closing debate of the EWWC conference was on the future of the novel, introduced by Étonnants-Voyageurs’ Michel Le Bris. Le Bris spoke of some of the difficulties that we as a society face at this transitional point in our history, with television, Internet, and so many other technologies competing for our ever-diminishing attention span. But he was equally optimistic, saying, “The only specialists of the unknown that I am aware of are precisely artists and writers.  As a result, they are needed with a renewed and special urgency in this period of momentous change of ours.  Thus it is that the novel form is critical to our times.”

Throughout the weekend, the festival and the EWWC debates in particular were an intense source of high-caliber literary discussion. Revisiting the original debate topics from the Edinburgh International Writers’ Conference in 1962 provided not only a sense of where we’ve come from, but where we might be headed as well.  Also, as a native English speaker – and I admit, I read mostly in English – I was delighted to discover several very impressive French writers whom I look forward to reading – in French of course.

Click here for a photo album of the weekend’s events in St Malo. You can browse all the keynote speeches from the French edition of the Conference here.